Homily for the Chrism Mass

Homily for the Chrism Mass 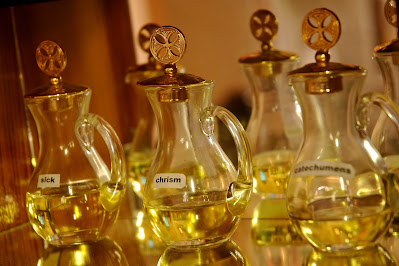 I had come to know my friend in our seminary formation, and I came to know his family. He was part of a large Irish family that had a number of priests in its membership. Among the priests in the family included an uncle who had been a priest for over 55 years at the time of the phone call — a time at which my friend and I had been priests for about two years. His uncle had a very sardonic sense of humor and was finally preparing his funeral plans at the insistence of his bishop — as many of us priests have done and as I have asked many of you to do.

My friend’s uncle had called him and asked him to be the homilist at his funeral Mass when that time would come. My friend was touched and asked his uncle if he had any readings that he would like to be proclaimed at the Funeral Mass. His uncle responded, “You’re the preacher, you choose them.” My friend, who is a very good preacher and is known to be always prepared, persisted as only a young priest and relative could persist. “Uncle, you’ve been a priest for 55 years and have served in parish ministry, you’ve taught, you were a military chaplain, and a chancery official. Certainly, you could help me by suggesting some piece of Scripture,” my friend said. His uncle looked at him and with perfect timing said, “Alright, why don’t you choose the Exorcism of the Gerasene Demoniac and let’s see what you can do with that.”

I tell you this story of two priests, an uncle and a nephew, an older and a younger, because it illustrates that in liturgical preaching we sometimes depart from using the Word of God as a bridge connecting the Liturgy to the daily events of our lives — both the serious and the mundane. Our seminary formation has rightly emphasized to us the importance of preaching a homily based upon the Scriptures proclaimed at the Liturgy. As I prepared to celebrate this year’s Chrism Mass and prepared my homily for the Mass, I must confess to you that I felt a little hesitant because my reflection kept taking me away from the readings prescribed by the Church’s Liturgy for this Mass. But now I see as I celebrate this Chrism Mass in anticipation of the Vigil of Pentecost instead of the Sacred Triduum, that we are formed to think with the mind of the Church and not simply in the Church. During these days of gloves and masks, days of physical distancing and other shields, days of sanitizing and rigorous hand washing, my mind has frequently gone to the Sacrament of Anointing of the Sick and its healing characteristics.
Part of the Rite for Anointing of the Sick, as the Church expects it to be celebrated, is that we read, “Through the apostle James, he has commanded us: ‘Are there any who are sick among you? Let them send for the priests of the Church, and let the priests pray over them, anointing them with oil in the name of the Lord; and the prayer of faith will save the sick persons, and the Lord will raise them up; and if they have committed any sins, their sins will be forgiven them.’”

The healing and forgiveness offered through the ministry of priests is that offered by Christ through us — Christ’s work through us. Pope Francis has suggested that it is the anointing, the healing, and the ministry of the Good Samaritan.

In that parable, the person who is traveling on the road is beaten by robbers and left for dead in a ditch. It is a dangerous road that leads to dangerous place. In other words, why are you traveling on it? While he is suffering on the side of the road, two other people encounter him and pass by him: a priest and a Levite. All priests were Levites, but not all Levites were priests. Priests offered the provisional sacrifice of the Old Covenant ritualistically. They were dynastic and functional in that they were the sons of priests who were the sons of priests and were born into it to provide the function of ritual. The Levites did not pay tithes but were entitled to be paid by the members of the other tribes. These two passersby represent a priesthood of functionalism and entitlement. Our anointing is not an anointing of functionalism or entitlement. Our anointing is the anointing of Jesus Christ, the Anointed One; it is the anointing of Christ the Good Samaritan, the anointing of mercy. As Isaiah prophesies, “To give them oil of gladness in place of mourning, a glorious mantle in place of a listless spirit.”

The early Church fathers, Origen and Saint Augustine, identified the Good Samaritan as representing Christ. The Good Samaritan does not fit in with the others. He is not on the road to do evil; he is on the road to save those from evil. He rescues the person injured by evil and binds his wounds and cleanses them through pouring oil and wine into them. He sanitizes them. He brings the person into the inn and pays the debt and promises to return to pay whatever is left over. The inn represents the Church. Pope Francis has spoken of the Church as a kind of field hospital that provides healing for the wounded and restoration to health and wholeness from the contagion of sin and evil. The oil of gladness sanitizes and prevents contagion.

These last several months of the COVID-19 pandemic and our response to it as society and as the Church has been an opportunity for each of us to be reminded that we are not simply a Church of the Word; we are the Church of the Word Incarnate. The suggestions made in good will by others that we provide worship through live-streaming only, as other religions have done, or that we console the sick and offer forgiveness and “confession” through telephone calls as other religions have done, has in a certain way manifested once again that we don’t fit in and do not conform to others. Let this be an incentive for us, especially the ordained, to be grateful and to not fit in because of our conformity to Jesus Christ the Good Samaritan, who did not fit in or conform to the expectations of the larger society or of the dominant culture.

We are the Church of the Word Incarnate. We are the Church entrusted to care for the soul and the body. Sacraments are incarnational. They are enfleshed symbols of God’s unconditional love as instituted by Christ who is God incarnate. The material of sacraments matters. The bread and grape wine of the Eucharist matter because they both feed and tell the story of Christ Who is broken to be given to us. The male-only priesthood matters because it is instituted by Christ and effectively symbolizes Jesus Christ as head and bridegroom of the Church. Of course, as we need water to relieve the thirst of our body, we also need the living water from heaven to quench the thirst of our souls in baptism. Likewise, when we are sick, we may rightly enjoy hearing about God’s love for us and about the miracles of Christ that healed the sick, and even more so we gladly welcome the anointing with sacramental oil, the tangible reminder that makes present the love of God who loves us so much that He is willing to touch us and to stay with us in our pain and in our need.

I would suggest that the limitations of western and contemporary philosophy include our over-reliance on the metaphor of sight in coming to understand and to recognize concepts. In contrast with that is the essential metaphor for the Christian Gospel revealed by the Incarnate Son of God: touch. Christ touched the lepers. Christ touched the eyes of the blind man and healed them. Christ washed the feet of the disciples. Christ offered Thomas His glorified wounds to touch. Christ broke the bread, blessed it, and shared it with His disciples. Christ, sacramentally, does the same to us, for us, and transforms us to send us into the world to embrace and to transform it by the proclamation of the Gospel of Mercy rooted in the truth fully revealed by Christ.

This, too, is an important point that the past months of intentional physical distancing without touch have reinforced: sacraments are the sacrificial means by which Christ lovingly touches us and transforms us. In this time of fear and illness, a time of masks and gloves and distances and other shields, it is right for us to marvel at this Chrism Mass that God calls us to bless oil. The sacred oil blessed at this Mass is a reminder that God our Lord, the Word-made-Flesh, loves us so much that He wishes to touch us when we are most vulnerable and most generous. Yes, God is everywhere, and as Catholics we also insist that God is near, that He wishes to touch us with His Christ, through His Chrism, and that He has chosen to stay with us, in all our good and bad and imperfect times.

When we were anointed at our ordinations, we also were touched through imposed hands. When we anoint, we also offer our anointed hands that Christ might touch others through the imposition of our hands. Through our priestly ministry, Christ transforms people into His Body. It is this ministry of priests that enabled Saint Teresa of Avila to speak truthfully, “Christ has no body but yours, no hands, no feet on earth but yours, yours are the eyes with which He looks compassionately on this world. Yours are the feet with which He walks to do good, yours are the hands, with which He blesses all the world.”
Posted by Diocese of Fort Worth at 4:10 PM