Homily for the Sixth Sunday of Easter 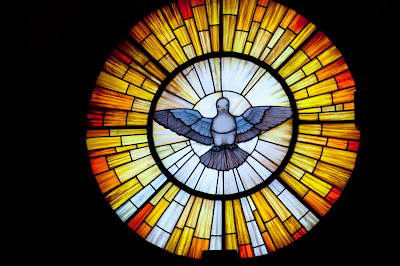 “If you love me you will keep my commandments. I will ask the Father, and he will give you another Advocate to be with you always, the Spirit of truth, whom the world cannot accept, because it neither sees nor knows him. But you know him, because he remains with you, and will be in you.” Jesus promises to send another Advocate who is the spirit of truth.

The Greek word for truth is “Aletheia.” It more literally means “not forgetting.” This translation carries with it greater objectivity than the verb “to remember” because “not to forget” conveys that the truth is something that is revealed to us; it is something that requires our receptivity but not our control and power. “Not to forget” is different than “to remember.” To remember means that I am the agent who calls to my mind what has occurred in the past and I reassemble it within my mind according to my biases and presuppositions of which I may be unaware. “Not to forget” means that something has occurred or been given to me or told to me and I remain attentive to what has been revealed and told and given — given for safekeeping, that is, not forgetting. This is what obedience entails for the Christian who does what the Lord commands. The Christian does not forget and remains attentive to Christ in love in the present moment. “If you love me you will keep my commandments.”

Loving obedience requires receptivity and a humble acknowledgement that I am dependent and that I do not forget that God is all powerful and wills not the death of a sinner. Jesus’ point in the Gospel today is that obedience is not constraint and forced compliance. It is not the overpowering domination of the human will by God’s will. The Advocate offers us an attractive, authentic freedom that begins through loving obedience of the truth fully revealed in Christ. The devil, the great accuser and liar, tempts us by telling us that to be free means to forget about God and to do whatever we prefer to do; when we take the devil’s bait, we are compelled down a path of slavery and death. The cruel irony! In rejecting the true freedom, which is obedience, we freely choose to enslave ourselves to death.

The Advocate speaks and offers testimony to hope as we read in the first letter of Peter. Hope has as its object God’s power — that He can do anything. The Advocate does not let me forget that I am dependent and require the free gift of grace that is God’s power directing me, guiding me, attracting me, but never forcing me or manipulating me to embrace the good.

Let us not forget that the Greek word for truth is aletheia, its literal meaning is not forgetting. We are assembled here at the altar and banquet table of Christ’s sacrifice to remind each other not to forget that the truth about our salvation does not involve the shortsighted remembering and retelling of a story that is biased towards our current and ephemeral interests and preferences in the face of our fears. When we are assembled for Mass, the Advocate reminds each of us not to forget what Christ has done and continues to do for us.

I conclude gratefully with a story about one of those people through whom God has not let me forget the truth of the grace of dependency in priestly ministry. Some of you might remember him, Father Baltazar Szarka, “Father B,” who served for many years as the pastor of Saint Francis of Assisi parish in Grapevine. He was born and raised in Hungary, entered a Cistercian monastery there, was ordained a priest there, survived the Second World War, and then was assigned to live in France for further theological studies. While in France, the Communists took over Hungary and shut down the monastery and dispersed and imprisoned the monks. His Abbot was able to send word to Father B not to try to return but to find a monastery elsewhere. Providence brought Father B to Texas and to Grapevine where he was assigned temporarily as the pastor of Saint Francis of Assisi parish in 1959 by Bishop Gorman — a temporary assignment in which he served for over 35 years until the mid-1990’s. He was a frequent confessor of mine and of many others. He would consistently give the compassionate penance of praying one Memorare as composed by Saint Bernard. “Remember, Oh Most Gracious Virgin Mary…” The only human person who has the power to remember instead of simply not forgetting is the Blessed Virgin Mary. She is the “bearer of the Word” who, through the merits of Christ Her Son, is Immaculate, free of sin, and full of grace. This makes her different than us but not separate from us. Thus, she remembers that God has remembered His promise of mercy, the promises made to our fathers, to Abraham and His children forever.

Father B retired from his pastorate and went to live in the Cistercian monastery in Irving after he began to show signs of dementia and began not to remember things. Many parishioners would still go to the monastery to see Father B and to consult with him about their problems and to seek his pastoral care. He would listen and counsel them to pray the Memorare as composed by St. Bernard, “Remember, Oh Most Gracious Virgin Mary….”

Father B’s health soon worsened to the point where he could no longer receive appropriate care and attention in the monastery that it was required that he live in a full-time care facility with daily visits from the monks and from his former parishioners. His Abbot later shared with me that when he accompanied Father B to the facility and they entered it, they encountered in the hallway a woman who was suffering from dementia and was calling out for help. Father B turned to the Abbot and asked with confusion, “what is this place?” The Abbot told him that it was his new priestly assignment. With that being said, Father B in obedience went up to the woman and encouraged her not to be afraid and began to pray the Memorare as composed by St. Bernard, “Remember, Oh Most Gracious Virgin Mary…” The Greek word for truth is aletheia. It means not forgetting.

As Catholics, we have nothing to boast in but our weakness. It is in that weakness that we receive the grace of not forgetting that our baptismal call is a gift to live at the hand of God — who is not so much the Truth to which we grab and cling to as much as the Truth that holds us and forms us as instruments who witness to hope. God is the truth that does not forget us instead of the truth that we remember.

Aletheia. Not forgetting. This means we cannot hide. We cannot hide from the awful fact and summons of the Cross. It means that we cannot hide from the glory and the promise and the summons of the Resurrection. It also means that we are powerless to save ourselves, and that in our powerlessness we require the Advocate to do so on our behalf that we might explain the reason for our hope in the fullness of the truth revealed by Christ.
Posted by Diocese of Fort Worth at 5:13 PM