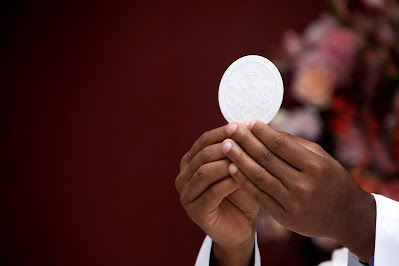 Solemnity of the Most Holy Body and Blood of Christ

The famous Catholic novelist Flannery O’Connor was once asked why so many of her stories were grotesque and even violent. She responded, “The novelist with Christian concerns will find in modern life distortions which are repugnant to him, and his problem will be to make these appear as distortions to an audience which is used to seeing them as natural; and he may well be forced to take ever more violent means to get his vision across to this hostile audience. When you can assume that your audience holds the same beliefs you do, you can relax a little and use more normal ways of talking to it; when you have to assume that it does not, then you have to make your vision apparent by shock — to the hard of hearing you shout, and for the almost blind you draw large and startling figures.”

If we listen to the readings of today, this Solemnity of the Body and Blood of Christ, we see the suffering and even violence experienced by the Israelites in the wilderness. We see the very graphic image of Jesus’ blood being poured out, we see the quarreling and repugnance among the members of Jesus’ audience when hearing His very graphic teaching on the Eucharist. We also see the provision of manna in the wilderness by a loving God for the disparate collection of refugees from slavery in Egypt and in so doing transforming them into one nation, His chosen people. We also see the total outpouring of life and love by Christ through His Body and Blood that makes the suffering of His death truly a sacrifice freely offered and freely received by God for all human beings. We also see the graphic figures drawn by Christ of the eating of His Body and the drinking of His Blood and we hear the shock of His audience. God the Divine author has written clearly in the flesh His Divine Word, and in so doing has made us, His audience, capable of making our beliefs change to become what He teaches.

The current fear and violence in our society, that of the pandemic and that of the civil unrest and its attendant racial enmity — spoken or presupposed in words slimy or sleek — have provided for us the eyes and ears to recognize violence and sickness as distortions that previously have too readily appeared to us as natural. God, through the gift of His own Son, the Incarnate Word, Jesus Christ, has writ large for us the figures necessary to hear and to see the gift of Himself in the Eucharist that is bloody and violent but because of the selfless purity of God, innocent and spotless, redemptive and transformative. God speaks to us again and eternally — always in the present moment and in our current circumstances, to embrace Him in the gift and challenge of the Eucharist — to see nature as graced, sin as redeemed, the disparate becoming one in communion with Him and with each other. He writes large enough with the alphabet of grace for us to see and to understand that our reception of Holy Communion requires us to accept His desires as our desires, that all may be one — many parts, one body.

Too often we are overcome by sin and the effects of original sin like ignorance and irascibility, concupiscence, and illness, and fall short of accepting His desires as ours. Too frequently what we do at this altar falls on ears made deaf through stubbornness; but heard clearly by the ears of God. We ignore and mistreat each other. We rebel against any authority but the dictates of our passions and preferences.  We refuse to see our neighbor let alone take responsibility for our neighbor. The Eucharist assembles us and unites us in Christ in accord with His authority. The differences among us — race, customs, cultures, class, and creed — will continue to separate us, hurt us, and make us suspicious of each other until we recognize that Christ has made us one in the shedding of His Blood and the offering of His Body and our reception of both with the fruits of the Eucharist that unite us in the God-given gift of belonging to Him and to each other. The Body and Blood of Christ is both our salvation and our mission, and only when we are in Communion with each other in His Body and Blood, can we transform the world.