Homily for the Feast of St. Lawrence: Ordination of Permanent Deacons 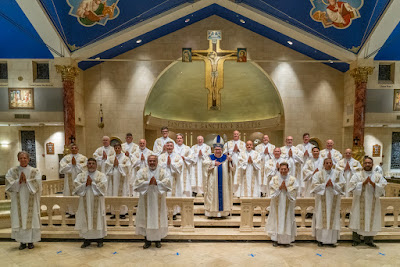 “Amen, amen, I say to you, unless a grain of wheat falls to the ground and dies, it remains just a grain of wheat; but if it dies, it produces much fruit. Whoever loves his life loses it, and whoever hates his life in this world will preserve it for eternal life.”

We are all very excited to be here this evening, on this Feast of Saint Lawrence, Deacon and Martyr. We ask his intercession for our soon-to-be deacons and for all of us as a Church, that we might remain focused on Christ, present in His treasures in the life of the local Church of Fort Worth. This evening is the culmination of the prayers of so many people who are friends, fellow parishioners, and the wives and family members of our candidates for ordination. While COVID-19 has prevented the gathering of many more people in this church tonight, by God’s providence it has offered the opportunity for many more around the world to be present and attentive to this liturgical celebration in the life of our local Church of Fort Worth by way of live-streaming.

Many of these people have asked our candidates the question, “What are you doing?” or “Why are you being ordained a deacon in the Catholic Church?” Many of our friends and relatives may not understand why you are doing this, and they might presume two reasons for your being here this evening. First, you are doing this with the support of your wife and family to have a new and successful experience of service in the Church. Secondly, you are doing this to make a difference in the Church or in society. I would like to caution against either of these reasons. First, more than likely, you will not have a successful experience of service in the Church as a deacon, certainly not how success is commonly measured. Secondly, more than likely, you will not make a difference in resolving problems that are insoluble on human terms and will remain long in the Church and in society after any of us are dead and judged. I would suggest rather that our candidates are here tonight because Christ has called them and has given them the grace to say “yes” to Him and to be ordained to the permanent diaconate, which is a above all else a ministry of charity.

The Acts of the Apostles and the history of the Church make clear that the diaconate is a ministry of charity and it’s important for us to be reminded of this because “charity,” like so many other words, can derive other meanings and can be confused with other things. The diaconate is not a ministry of outreach. It is not a ministry of social action. It is not a ceremonial ministry. It is a ministry of charity. Charity is the very life of God into which we are baptized and into which we will enter fully after we have passed from this world through a faithful life of hopeful witness to Christ.

A story. When I was a college student in Washington, D.C., I had a classmate by the name of Colin. He was very bright and gifted. He had decided to spend one day a week with a group of students being present to the homeless in Lafayette Square for two hours every Friday.  The group would make sandwiches and distribute them among the homeless and distribute toiletry items and warm clothes during the season of inclement weather.  It seemed to me to be an exercise in futility. We would always pray for the homeless at daily Mass and we would receive various lectures and presentations on the problem and causes of homelessness. The school year ended and we each went home — except for the homeless — who remained at home in their homelessness.

That summer, while my friend Colin was at home, he collapsed, and he was diagnosed with a very rare and aggressive form of cancer that prevented him from returning to the seminary in Autumn. We began to pray for Colin at Mass. About a month into the new year, one of the members of the outreach group, a new student, came to me and asked if I kept in contact with Colin. I told him that I did, and the new student asked that I convey a message to Colin from a man named Peter Joseph to tell him that the people living in Lafayette Square had heard that Colin was ill and they wanted him know that they were praying for him. I phoned Colin, and with the early faith of the Apostle Thomas asked him if he knew a man named Peter Joseph. He confirmed that he knew him to be a man living in Lafayette Square. I told Colin that Peter Joseph and the other homeless were praying for him. To which Colin said, “please thank him for me.” I then proceeded on the next Friday to make sandwiches and seek out the homeless man, Peter Joseph, to deliver the message in person.

“Amen, amen, I say to you, unless a grain of wheat falls to the ground and dies, it remains just a grain of wheat; but if it dies, it produces much fruit. Whoever loves his life loses it, and whoever hates his life in this world will preserve it for eternal life.”

Posted by Diocese of Fort Worth at 6:15 AM