Homily for the Twenty-second Sunday of Ordinary Time 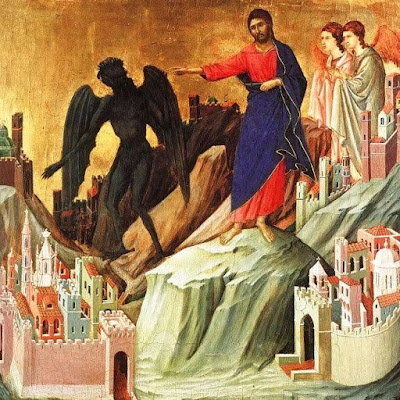 In the novel entitled The Great Divorce, written by C.S. Lewis, we read a unique story that depicts a visit to Heaven by a group of strangers from hell. Lewis depicts these strangers as empty and translucent and because of these qualities they are referred to as ghosts. In contrast, the angels and saints of Heaven whom the ghosts encounter are solid, and thus Lewis refers to them as solid people. In one encounter between a ghost and a solid person, there is a little, ugly lizard sitting on the shoulder of the ghost. The lizard is constantly speaking into the ear of the ghost, manipulating it, and drawing the ghost’s attention away from the beauty and truth of heaven that surrounds him. At one point, the solid person, an angel, asks the ghost, “would you like me to kill the lizard?” The ghost is first confused so he just gives a passive nod of approval, not truly understanding to what he has just agreed.

The solid person, an angel, takes a step forward and at this the ghost is taken aback and does not understand what is about to happen. So, the angel asks once again, “may I kill the lizard?” This time the angel touches the lizard slightly which causes the ghost to writhe in pain. The ghost once again stops what is happening, now repulsed by the pain he has just endured.  This prompts the ghost and angel to argue, the angel always asking the same question, “can I kill the lizard?”

Finally, the ghost surrenders and allows the lizard to be killed by the angel. Immediately a few things happen: the angel grabs the lizard and throws it aside and the ghost writhes in pain due to the suffering he experiences at first from the loss of the lizard. However, very soon afterwards the ghost begins to turn solid — starting from the shoulder upon which had previously sat the lizard — until his whole body finally becomes whole again.

The ghost in C.S. Lewis’ story only becomes solid due to this interaction with Heaven. In his free will, the ghost could have said no to the angel, and the angel would have let him remain with the lizard. The angel, being faithful to God the Creator, would not violate the ghost’s free will. Instead, the ghost decides to cooperate with the angel and then goes through the pain and suffering that is the only way for him to be healed and released him from the sin he carried around with him. In so doing, the ghost comes to understand the love of God and enters heavenly glory.

Our readings today are all about the relationship between Christ’s love and suffering. We too often divorce these two realities in our own minds, frequently choosing a passive love, the easy affection, the affection devoid of sacrifice, the affection that brings the complacency of a fleeting pleasure.

Jeremiah’s prayer in the first reading hardly sounds like a prayer. “You duped me, Lord, and I let myself be duped. You were too strong for me and you triumphed.” Jeremiah was mocked, laughed at, derided, and persecuted. He finally told God that he had had enough, but to no avail. “The word of God is like a fire burning in my heart, imprisoned in my bones. I grow weary holding it in, and I cannot endure it.” The gift and vocation of prophecy that Jeremiah had received from God required great courage and perseverance that Jeremiah decided to exercise freely.

Saint Paul echoes Jeremiah in our second reading today when he speaks about being a disciple of Christ. Saint Paul writes to the Church in Rome, “Do not conform yourself to this age and this world but be transformed by grace so that you can know what God’s will for you is.”

The Gospel shows us that Peter, the rock of the Church’s faith, had a hard time persevering in the call of the Lord. Immediately after Jesus makes him the Rock on which Christ builds His Church, Peter is unwilling to accept the suffering and cross Jesus predicts for Himself and His followers, especially Peter. St. Peter at first divorces love from suffering, “God forbid, Master that anything like that ever happen to you.” Then Jesus begins to show Peter continuously that the Father has wed divine and human love in the Son’s faithfulness to the cross, a faithfulness that enables Peter and each of us to embrace and to live.

We learn from Jesus today that following Him is never without suffering. When we decide to follow Him on this path, we let go of the plans we have made for ourselves in order to make ourselves available to the Holy Spirit for God’s plans. We accept the situations and people in our lives who offer us challenges that help us grow in the practice of living the Gospel. We come to know the will of God for us in these situations and through our relationship with these people. Our perspective is no longer what we want but how can we be of service. Our attitude changes from one of self-concern and self-preservation to one of compassion and charity and we soon find that Christ has removed the lizards from our shoulders as we have asked Him to do.

This is not what the world tells us to do (most obviously in commercials and through social media, but also in the way we see others live). The world is always trying to convince us that it is reasonable to befriend the lizard. The world tells us to avoid pain at all cost, to make sure that we are always comfortable, that things and possessions are indispensable for life, that being chaste is impossible, that there are no such things as lifetime commitments like matrimony or a religious or priestly vocation. The world wants us to be distracted and to buy into wealth, power, and privilege, and frequently we do this resulting in our being emptied of the solidity of God’s love. In the eyes of the world, our faith is at best useful for a politically partisan agenda and at worst it is just stupid self-destruction.

Peter thought that Jesus’ prediction of suffering and the cross was foolish, but despite his error Peter did not give up. Peter followed Jesus to Jerusalem even though he was afraid. Peter followed Jesus in his Passion even though he had denied him, and he came back to the tomb even though he had run away from the cross. Our prayer is that we may decide to have the same courage and perseverance in following Jesus that Peter ultimately had. As Christ announces His passion, death, and Resurrection to His disciples and to us, we are faced with a decision, we either fully accept Christ or reject Him. There can be no indecision. Pope Benedict XVI preached in 2005 on Good Friday: “Evil draws its power from indecision and preoccupation for what others will say about us.”

To keep the spirit of faith is to decide to place Christ first in our love for God and other persons through committed actions to refuse to see things in any other way than through the eyes of faith. In doing this, we will suffer but we will truly love only if Christ is first, with our neighbor second, and ourselves third because suffering and love are united in His cross that He shares with us and helps us to carry and to love as He loves. After all, “what will it profit us to gain the esteem of the world if we forfeit our eternal life with God? For whoever would save his life will lose it, and whoever loses it for love of Christ will find it.”