Homily for the Twenty-fourth Sunday of Ordinary Time 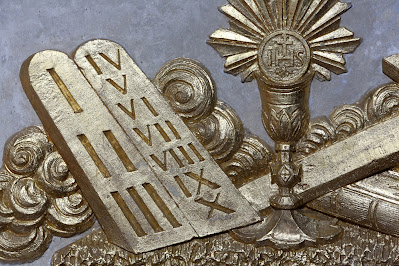 “Wrath and anger are hateful things, yet the sinner hugs them tight.” This passage from the Book of Sirach today is a reflection on anger, vengeance, and forgiveness. Wrath and anger are destructive forces, and we tend to let them overtake us and drive us away from reason. We remember insults and injuries we have received and feel justified in returning the same. Unfortunately, our anger not only hurts others, but make us bitter and resentful and increasingly irrational. The offensive civil discourse of today is neither civil nor discourse because anger has taken over many of us and has foisted disorder into our shared common society.

The extreme positions of the political left and political right currently have something in common: anger and the refusal to accept accountability for one’s actions and responsibilities. They each have the desire to develop a system of government that does not require human beings to become morally virtuous. Both extremes foist upon the people a notion of government in which the government becomes the agent whereby the people become entitled to take little, if any, responsibility for their own actions or the actions of the society of which they are a part. This includes both the statist approach of the socialists and the laissez faire approach of government espoused by contemporary conservatism.

For us to say that individuals are distinct persons does not mean that they are selfish egoists. Rather, individuals can only flourish in a community through cooperation with one another with responsibility for their own behavior and the consequences of their behavior. This means that persons must cooperate with each other to survive physically, emotionally, spiritually; or we will end up interacting with each other as objects to suit our own selfish purposes. Cooperation is necessary also in the sense that the well-being and moral development of one’s own person is inherently linked to other persons’ well-being, and without other persons’ well-being, one’s own well-being would be substantively incomplete.

This is what comes into focus in the Gospel for this Sunday’s Mass — the parable of the unforgiving or unmerciful servant. Without excusing the unmerciful servant for his actions, we wonder how we often imitate those actions. How often do we forget how God has blessed us? How often do we not even realize what He has given us? Do we ever ask ourselves how we might repay God’s generosity to us? When Jesus commands us to forgive seventy-seven times, He is asking for perfection in forgiveness. Forgiveness takes time and involves our healing and grief of the pain that we have suffered from the injustice and harm done to us by another person. Remembering what we have been given and how often we have been forgiven allows the Holy Spirit to enter and change our hearts. After that, miracles can happen. And supreme among those miracles is mercy — given and received. This is the very thing that the unmerciful servant forgot in his dealings with his fellow servant who owed him so much less (literally, 100 days’ wages) than what he had owed his lord and master, who in showing him mercy, forgave him the entire debt (literally, 150,000 years’ wages.

It is important to remember that mercy is not the suspension of the moral order. Mercy does not ignore wrongdoing and sin. When we receive mercy and when we offer it to others we are reintroduced to the accountability of the children of God, just as the prodigal son was so reintroduced by his merciful father. This accountability maintains a structure of right order beginning with what we owe God but also involving human beings with a definite hierarchy with rights and responsibilities.

The fourth commandment is the duty one has to one’s parents: “Honor your father and your mother.” The Catechism of the Catholic Church teaches that “the fourth commandment is addressed expressly to children in their relationship to their father and mother, because this relationship is the most universal.” But it also states that the fourth commandment “extends to the duties of pupils to teachers, employees to employers, subordinates to leaders, citizens to their country, and to those who administer or govern it.” Furthermore, “this commandment includes and presupposes the duties of parents, instructors, teachers, leaders, magistrates, those who govern, all who exercise authority over others or over a community of persons” (CCC §2199).

It is important to note that the first three commandments articulate what we as human beings justly owe God, which is the virtue of piety. The fourth commandment follows upon this debt to God with what we owe other human beings, which is the virtue of justice. This human debt begins with our parents, father, and mother, and what follows in the subsequent commandments are the just delineations of other human relationships within and with society.

We must remember that the commandments are the Covenant first made by God with Moses which makes the disparate group of refugee slaves into one chosen people — God’s chosen people on pilgrimage to the Promised Land. The Commandments are not an arbitrarily placed list of single and distinct imperatives united only in that they are ordered by God and intended for human obedience. As the Covenant, they are binding and follow each other in a clearly ordered and inherently united sense. Within God’s Covenant, each Commandment follows the previous one by drawing God’s people more deeply into the loving and just relationship of belonging to Him and to each other. The Commandments belong to each other in both substance and order; God’s people belong to each other in both the substance of family life and an order of political life, language, and culture.

Posted by Diocese of Fort Worth at 1:21 PM