Homily For The Fifth Sunday of Lent 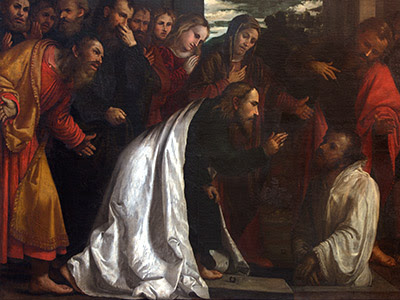 At the Kimbell Museum here in Fort Worth, as part of its permanent collection, there is a powerful artistic depiction of The Raising of Lazarus by the fourteenth century Italian (Sienese) painter Duccio. What the Kimbell has was part of a larger altarpiece, that is to say, the work of art was painted to stand behind the altar to highlight what happens upon the altar, the sacrifice of the Mass — knowledge through appearances that points to a knowledge beyond appearances based in trust and love.

In the painting, we see Martha talking to Jesus, “If you had been here, Lord, my brother would not have died….” Mary is at His feet crying. There is a growing crowd, and one is unsure of their intentions. Lazarus is still bound in the wrappings of death and is standing at the threshold of the tomb that has just been opened. There is one figure in the painting that draws my attention. He is a bystander, not mentioned in our Gospel reading. He is holding his nose closed with his hand: “By now there will be a stench; he has been dead for four days.” I am taken by him because he is judging well by appearances — like so many of us. He knows that a four-day dead man’s grave is being opened, and he prepares himself for the inevitable smell of decay and death. His posture conveys the idea, “I’ve seen this before, I know how this turns out.” It’s a real knowledge of real things; but it’s insufficient for grasping and understanding all of reality.

But what we do know is beyond and transcendent of that which appears — a sacrament — making present Christ’s victory of life over death in His Resurrection. Like the bread and wine of the Eucharist, which becomes the Body, Blood, Soul, and Divinity of Christ through the action of the Church carried out by the priest and maintains the appearance of bread and wine, but is so much more than what it appears to be, knowledge of what is real beyond appearance — knowledge of reality based upon trust and love.

Martha’s statement and Mary’s tears convey what all of us think and what all of us are feeling during these days. Mary’s tears are those of deep grief and fear at the death of her brother with only a sense that what was familiar, safe, and pleasant is now gone. Martha’s statement to Jesus is a firm and practical knowledge based upon appearances. “Lord, if you had been here, my brother would not have died.” Implied by this statement is the question, “Where were you?” “It’s only two miles away.” “Didn’t you know, and don’t you care?” Martha’s words and Mary’s tears articulate it well on each of our behalf, “Lord, if you were here (but you weren’t) he would not have died.” “You could have prevented this” (but you didn’t). If you were here, your compassion would have saved Lazarus.

Where is the compassionate Jesus in today’s Gospel? He shows up too late to heal Lazarus. Why does He wait for Lazarus to die? Does Jesus wait to show up late and allow Lazarus to die just so Jesus can make a point about Himself in raising Lazarus? That would not be compassion; that would be manipulation and not fitting for Christ. Jesus doesn’t respond promptly and preempt the suffering of Lazarus and the grief of Martha and Mary. He has more to offer than that which only appears.

His compassion has much more mettle to it, and it is the compassion He offers us and enables us to share. He enters suffering of death, its anticipation, its grief, its seeming meaninglessness, its poverty, its fear, its alienation, every dreg of its being the bitter fruit of sin. He does so and He redeems it. He redeems it by experiencing it and being indignant over it. Death and grief, like sin, though real, are not befitting of human beings. Christ has been sent by the Father to conquer sin, to vanquish death, and to heal grief. This story from the Gospel manifests that He is set to do just what the Father has sent Him to do— He offers authentic compassion and not simply pity.

The American philosopher Paul Weiss once wrote, “Compassion has often been misunderstood as a kind of pity for the unfortunate. True compassion is the production of a unity which is oriented towards God because each of the beings approaches the other as one who is to be lifted out of the situation where the suffering occurs, and dealt with as one whose true nature and destiny is to be understood in new terms.”

We find ourselves today in the first part, knowledge based on appearances, and the Spirit prompts us to enter and to accept a knowledge beyond all appearances, a knowledge based upon trust and love. This is compassion. The proof of compassion is in the anguish that Jesus experiences. It’s a type of indignation at the power of death. This is precisely what Jesus has been sent to heal and to conquer, as prophesied by Ezekiel.

We must recognize ourselves in the position of Lazarus on the threshold between darkness and light, between death and life, between sin and righteousness. We’re on the cusp between light and dark: death and darkness behind us, light and life before us. At this threshold, the bindings of death and darkness hinder us and we must recognize that we ourselves are not sufficient to answer the call; we need the assistance of others to answer the call of Jesus to leave the tomb, we need the help of the Church to unbind us.

Compassion is to insist that you have an identity, a dignity, and a destiny beyond the appearance of this present darkness. If we stay at the knowledge of appearances, it’s quite understandable if we are inclined to say, “Lord if you had been here...” It’s also more than understandable, it’s also incomplete. Those who know Christ and therefore love Him can move beyond appearances without denying their own reality.

We return to an earlier verse from the passage, “The one you love is sick.” This prayer cries out for help but doesn’t give God instructions about how to fix the situation. The prayer conveys, “Lord, I don’t know what you know but I do know you. Thus, I know that you are good, and I know that you are love.” Because we recognize and acknowledge God as love, we can allow God to work in sovereignty according to His wisdom, according to His goodness and not ours.

The Church asks us to listen to today’s Gospel passage not simply to be edified but to be transformed that we might be conformed to Christ, who is among us with a work to do. A true encounter with Christ always results in love of God and love of neighbor. So even in these difficult times, especially in these difficult times, our prayer must lead to works of mercy and compassion.
Posted by Diocese of Fort Worth at 9:48 AM