Homily for Palm Sunday of the Lord's Passion

Palm Sunday of the Lord's Passion 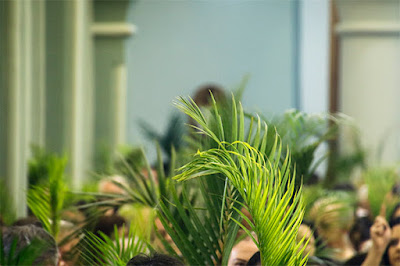 Crowds play a central role in today’s Gospel proclamation of the Passion. There is an important distinction to be made between a crowd and an assembly.

The crowd, to take an example from today’s Gospel, is easily swayed by its passions and emotional highs. It can go from emotional high to emotional high. So, the crowd can chant Hosannas to the Son of David as Jesus enters into Jerusalem one moment and then later — because its passions have been stirred differently — can be shouting “Crucify Him, crucify Him,” as Jesus is condemned to die. Crowds are fickle and capricious and very isolating. We can feel most isolated when we are in a crowd because a crowd is a collection of individuals who move from passion to passion, emotion to emotion, fad to fad, without a defined sense of belonging. In some sense, with a crowd it is everyone for himself or herself since emotions are not guided by right reason and judgment as God has designed them to be so guided.

A crowd is gathered by chance, individuals in a crowd have no stake in one another, they have no relation, by dumb luck they just happen to be in the vicinity of one another. Crowds are dangerous in two ways: First, one can be terribly lonely and afraid in a crowd. Secondly, a crowd can be whipped up into a mob of individuals who become excited to have something in common with each other — most often a common fear or hatred. This can also be seen in the domain of social media that carries with it a veneer of anonymity and isolation and at times can be whipped into a mob that bullies and hates instead of a means of communication within a community.

An assembly, by contrast, even if some of the members are not familiar with each other, is not a crowd because they share common beliefs, common values, and most importantly they share a common destiny. The liturgical rites of the Church refer to the people gathered not as a congregation but as the “assembly.” All members of the assembly know that they have been bound together by Christ who has assembled them in a communion that is eternal and rooted in His sacrificial love — the love revealed and given totally through His Cross. The assembly of believers is different, even when alone — as we are on this Passion Sunday because of the coronavirus pandemic — we are not isolated. Though the Eucharistic assembly may look like a crowd when we gather at church under usual conditions on Sundays, the assembly has as its focus Christ crucified and His communion with all the members of the assembly. The grace of being a member of the assembly, even today when we are physically remote from each other, is that Christ, who has called us each by name, is present to each of us and all of us.

The crowd in today’s Gospel becomes a mob hostile to Jesus when they recognize that He really means what He says about His mission from the Father as the Christ and Savior. They become afraid and then they become enraged. They recognize that discipleship of Jesus truly requires following Him obediently to His death on a cross. They recognize that discipleship requires, as Jesus states earlier in Matthew’s Gospel, the works of mercy motivated by the same compassion that God has for us in giving us His own Son to ransom us from sin and death. These are the works of mercy that especially are directed to the poor…those particularly identified in the parable of the sheep and the goats in Matthew 25, which is the last great discourse of Jesus before He enters into His passion and death that we just proclaimed in the Gospel today.

It’s not one, two, or even three times that Jesus mentions His radical self-identification with the hungry, the thirsty, the stranger, the naked, the sick, and the imprisoned; He specifically states it four times. These poor and marginalized persons are part of Christ’s sheep even when they are alone, just as we are today alone…but not isolated. The sheep are those who belong to the flock, the assembly. They include those who compassionately care for the needs of Christ as He is disguised in hunger, thirst, and alienation; the goats are those who never bother to look and decide instead to isolate themselves in the cordial and distant anonymity of a crowd. The goats belong to no one but their unbridled appetites.

Our current quarantines and “stay at home” orders cause us a pain that can only be redeemed by Christ. In His redemption of our pain He prompts us to examine our consciences to see if we usually come to Mass as a part of a crowd or if we come usually come to Mass prepared to assemble as the Church. Our current quarantines and “stay at home” orders provide us with even more opportunities to recognize Jesus in the poor and isolated and He invites us to look for Him. This is a time for us to become conscious of Christ among us. This is the time for us to reach out to those who are usually shut-in, the elderly, the chronically ill, and all those who are most vulnerable to contract the coronavirus and to suffer the gravest of consequences if they do. We can phone or text them, inquire of their needs and provide essential services like food and medicine delivery in the safest of ways.

This Sunday, as we cannot come together in the usual way to enter with the Eucharistic assembly into Jerusalem, we are at home with Christ alone. Yet, while not physically present we are in communion with Christ crucified and with each other and not simply looking on as spectators in a crowd.

Often, on Palm Sunday, the assembly gets to play the role of the crowd in the liturgical proclamation of the Passion. This Sunday, it is different because we are being made to see that we are not simply to attend Mass as individuals isolated from each other in a crowd (the goats) in a distant relationship with Jesus, but rather that we belong to His flock (the sheep). As sheep we are a body — alone with Jesus — but still in communion with each other through Jesus who said, “whatever you do to one of these least ones, you do to me.” Being members of a body means that we are incorporated — embodied together. And the works of mercy, both spiritual and corporal, are precisely our part and our share in His Cross. They are the measurement that Christ will use to judge us when we die.
Posted by Diocese of Fort Worth at 12:29 PM